A New Year; Some Old TV. What are your TV resolutions for 2020?
END_OF_DOCUMENT_TOKEN_TO_BE_REPLACED Welcome to our first ever Throwback Thursday, where we drop all the cool happenings in Pop Culture News from this last week, all in one place! New Trailers, Awards announcements, what’s in, what’s out, what’s worth even thinking about (yeah, we said that). Take a look!

The Eagle Armor! Steve Rogers Trevor! New Order’s Blue Monday! Pedro Pascal looking like a digitally de-aged Rutger Hauer! (RIP, my dude.) This trailer literally has everything cool in it. Is it June, 2020 yet?

You know, the washing away of our Lady Ghostbusters made me really want to hate the new Ghostbusters film, and yet here we are. Not hating it. You can’t really hate a movie that has the Stranger Things kid, Paul Rudd, and a shot of the Ecto 1’s gunner seat in it, you just can’t.

Golden Globes Nods are OUT:

I have just one question for this list: How the HELL did Parasite not make it onto the Best Picture list????

The shining spotlight is that Ramy Youssif of the truly awesome Ramy got nominated. Ya boy Sammy over here at Girth Radio got a chance to sit down with May El Calamaw, who plays Ramy’s sister on the show. Be sure to check out the interview below and then get to watching yourself. You won’t be disappointed. The Comings and Goings of Netflix in January

Why is this important? Because it’s happening: Netflix is losing Friends (pun obv intended, duh). But they’re gaining Ferris Bueller, so really, who’s the loser here? 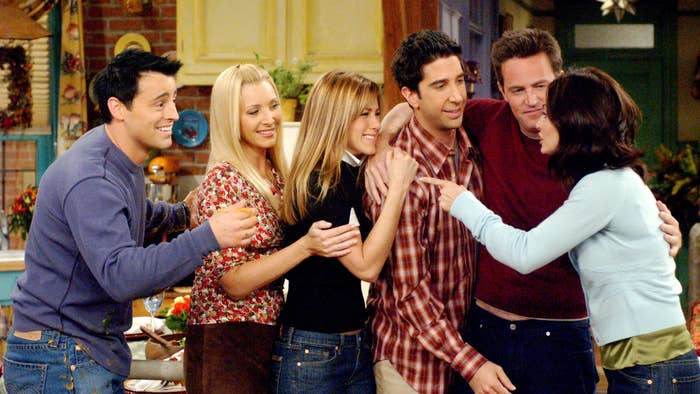 That’s it for our first spin around the #TBT block. Like getting your pop culture news deets in one place? Let us know, maybe we’ll make it a thing. My weekly collection of new and notable books for your pop culture pleasure and edification: #ReadMoreTweetLess.
END_OF_DOCUMENT_TOKEN_TO_BE_REPLACED Is this good?
Will this be good?
Every movie trailer answers or challenges those 2 questions. The ham-fisted rebuttal comes swiftly, however: no you don’t need to always see a movie to know it’s tank.

Do you really need to sit through a Michael Bay Transformers movie to know for sure? Tank is Tank. And Fresh…well Fresh is always Fresh. I’m down like I’m Brown for that.
END_OF_DOCUMENT_TOKEN_TO_BE_REPLACED

New Yorkers are known for being brash, honest, blunt, into all black, and too busy to stay in one place. But come every first weekend in October, that all changes as New York City Comic Con –  arguably the biggest nerd con in the US (sorry San Diego) – descends on our fair city.

This past weekend was NYCC ’19, and like every good con, the world found their focus on the colorful, the new, the exciting and enchanting, the sense of family.

This wasn’t my first venture into the World of Con, but it was my first time going in with a special appreciation to cosplay. Everyone always asks me, will I be dressing up, and my answer has always been a hard no because frankly, I have neither the time nor the money to dedicate to what a good cosplay needs, and I’ve never been known to go into anything half-assed.

There were baby Deadpools and giant Orcs, a Captain Spider-Man (probably the only time you’ll ever see Brooklyn venture to Queens), Waldos spotted everywhere, one woman who’s entire dress was made up of drawings by the artist with her (and apparently it lit up), the entire lineup of Disney Princesses, and my personal favorite, the entire lineup of Elton Johns. The amount of sheer dedication that goes into making these things for the chance to wear them for just a few short days will never not completely and utterly blow my mind. And that’s with having friends who are professional cosplayers (yup, that’s a thing).

But NYCC wasn’t just about the raddest looks you could find: every year NYCC brings the latest and greatest in what’s going on in both comics and entertainment. Here’s just a few of the highlights I came across:

Hulu’s Castle Rock is coming back, and I got an advanced sneak peek at second season premiere. And let me tell you, first season was great, but second season focuses on Annie Wilkes, and for all you Misery lovers out there, you are in for a wild ride. I’m pretty sure I shouted ‘THE FUCK??’ more than a few times. Also, I will never look at an ice cream scoop the same way again. (First ep is now up and streaming. Stop reading this and go watch it. Then you can come back.)

Snowpiercer is coming to TV. Based on the comic book that also hatched the 2013 runaway (heh) indie hit, Snowpiercer focuses on life on The Train seven years in the future from the its launch (ten years before the film, though no mention was made that the show is In Universe). I went to a preview and a cast Q&A that included the ever lovely Jennifer Connelly, as well as Daveed Diggs and Lena Hall, who seemed to be battling it out for who could pull off the best monochromatic look (Lena won because seriously, she was a head-to-toe disco ball of mirrors). The TV series, of the few snippets we got to see, reminded of me what would happen if The Handmaid’s Tale had been created by Wes Anderson. Just one universe left of ours, except dystopian.

Insight Editions (or Insight Comics, depending on who you ask) is coming out with a David Bowie comic book. That’s it. That’s the whole highlight.

Stan Lee wrote one last piece of fiction, Trick of Light with Kat Rosenfield. It started out as somewhat of a podcast that was converted to a book, and if you’re smart, you’ll get your hands on a copy.) Also, Sammy here did an interview with her, so be sure to check that out as well and get all the deets on all things Stan and making a final piece of magic.)

The main floor was just as busy as always, with the NYCC Live Stage blazing through cast interviews every 15 minutes, all weekend and the line for the Funko booth being…not worth it. The Marvel booth didn’t disappoint, bringing some epic swag I managed to talk myself out of buying for the first time, uh, ever, and bringing in a slew of casts for Q&As and signings. After the success of The Umbrella Acadamy’s first season, Dark Horse Comics could be seen pushing the comics hard. And everywhere you turned, the booths were all selling something Good Omens.

(Side Note: I was actually at that sneak peek and Q&A for Dark Omens at last year’s NYCC, and anyone who was in the Hulu Theater that day knew it was going to blow and blow big. Glad to see the rest of fandom caught up.)

Finally, Sunday was one of the busiest days I have ever seen (which is saying something, it’s usually one of the slowest), and Artists’ Alley was going off with people snatching up art of their favorite characters from an array of creators, all on hand to talk comics, art, and this bizarre sub-culture we all reside in. I was right there with all of them, fangirling over BossLogic in particular, and buying up his art even though I was well over my ‘buy nerd shit’ budget I’d set for the weekend.

But then, when it comes to NYCC, with everyone carrying something that fits your fanish tendencies as well as your lifestyle, budgets are for quitters.

This is Stephanie, signing off.

For a gallery of images, please visit our Instagram page @girthradiogallery.

As a special thank you to all those who’ve followed along, we’re giving away a piece of art we picked up at SDCC (because we cool like that). An awesome Thor art by the absolutely bitchin artist behind practically all of the MCU’s art, Ryan Meinerding. To enter, just find the post we put up on IG, and enter. Contest will run thru 10/20.